In Love With Crystal Symphony All Over Again 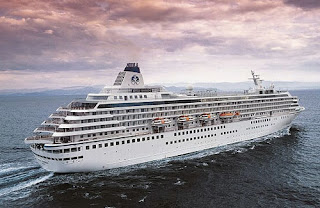 A fresh look and new features are typically the results whenever a ship goes through a redesign. But my husband Humberto and I had sailed on the Crystal Symphony five years ago and we had loved her just the way she was, so we were curious to see what had changed after her fall 2017 re-imagining. We got our opportunity when Humberto noticed that she would be doing a cruise from Port Canaveral, which is near our Florida home, to the Caribbean in late October, and ending also conveniently in Fort Lauderdale in early November. We did not waste any time and booked it. We fell in love with her all over again!

In addition to a refreshed look of her refined contemporary décor in pleasant blues, creams, whites and other soft tones, the redesign of Crystal Cruises’ 51,044-ton Crystal Symphony reduced the passenger capacity from 922 to 848, which resulted in more space per passenger: a 64.7 space ratio (the enclosed space per passenger measured in cubic feet) which is one of the highest in the industry, and the ship, that had never felt crowded, has now an even more spacious feel. This spaciousness and the pampering and attentiveness yielded by a guest-to-crew ratio of 1.49, makes you think you “have arrived” in more ways than one from the moment you board, and the feeling remains until you disembark.

The redesign in the fall of 2017 added new features including open seating dining and new culinary offerings as well as technological advances including interactive cabin televisions with free movies and documentaries as well as enrichment lectures live and on demand.

Arguably the most popular addition is the alternative restaurant Umi Uma (the name means seahorse in Japanese and it is a nod to Crystal’s logo). This Asian restaurant and sushi bar by Chef Nobu Matsuhisa serves up such delights as Nobu lobster, miso-glazed cod and wagyu beef. On a typical cruise, all passengers receive one complimentary dinner at Umi Uma (with return visits if desired costing $30 per person; Penthouse category and above receive unlimited complimentary dinners). The line’s much-beloved Prego, Crystal’s staple intimate and romantic restaurant, has remained. It is inspired in Venice and features Italian cuisine with such specialties as antipasti with Parma ham, mushroom soup in a bread bowl, veal scaloppini and Piedmontese flan (with chocolate and almond flavors).

Waterside, the main restaurant, was refreshed and serves international specialties (two menus that change daily are presented to diners each evening, one with classics such as steaks and chops, and the other with modern dishes such as venison medallions with wild mushroom spring rolls) and, since the redesign last year, features open seating dining between 6 p.m. and 9:30 p.m. each evening. And the refurbishment also added to the casual dining venues: Churrascaria (a Brazilian steakhouse available in the evenings in The Marketplace buffet restaurant—yum!) and Silk Kitchen & Bar, a Chinese eatery that serves dishes family-style—this latter new venue is next to the popular Trident Bar & Grill that has been offering burgers, wraps, pizza and more throughout each afternoon.

When it comes to entertainment and enrichment, the ship has a wide variety of offerings including Broadway-style productions (two shows presented each evening—a rarity on ships featuring open seating), presentations from magicians from Los Angeles’ Magic Castle, comedians, ventriloquists and music in various lounges. Themed teas, like the Mozart Tea with staff in period dress, are unrivaled at sea. Beverages and gratuities are included in the price of the cruise. Each sea day there are organized activities including dance, computer, and art classes and talks about the ports. And after days filled with activities and entertainment onboard and adventures ashore the ship’s accommodations are comfortable and attractive. All accommodations include unlimited free Wi-Fi (faster than before the refit), television with complimentary movies, free bottled water and sodas, and ETRO bath amenities, ETRO bathrobe and lightweight kimono. Penthouse and above accommodations offer additional features including complimentary bar set-up on embarkation, free wine and beer, welcome champagne, afternoon canapes, unlimited complimentary dining at the alternative restaurants. and butler service.

In other words, she has all that is needed for a superb vacation including a wealth of dining, entertainment and enrichment choices, her expansive Seahorse pool and Jacuzzis, spa, salon, and fitness center with exercise classes and wellness programs, casino, observation lounge, and lots of open decks for lounging, games and even some exercise equipment for those who like to work out in the outdoors.

The ship whisked us from one idyllic spot to another making stops in Jamaica, Aruba, Puerto Rico and Bimini. Here are some port highlights:


• Ocho Ríos, Jamaica – At this Jamaican port, arguably one of the top 10 sights in the Caribbean: Dunn’s River Falls, a quintessential tropical cascade, awaits. Famous world-wide since scenes from the movie “Cocktail” with Tom Cruise were filmed at the waterfall, it is a breathtaking cascade. The waterfall descends as if over a 600-foot-long natural rock terrace and staircase surrounded by tropical vegetation until it gets to a lovely sandy beach—a great spot to relax before or after climbing the falls. Visitors link hands (to rescue each other in case of a slip during the climb). The cascade’s waters tend to be on the cool/cold side, so the experience is refreshing in the heat of the tropics. And the panorama is like a living painting—reminiscent of Henri Matisse creations of figures linked by their hands and frolicking in various locales.
• Oranjestad, Aruba – On this Dutch island near Venezuela we enjoyed the view of Dutch architecture on various buildings and structures including De Olde Molen, a windmill built in The Netherlands in the 19th century and transported to Aruba—now it is a nightclub—and the pretty little Alto Vista Chapel built in the 18th century in Dutch style. We also spent time on Aruba’s beaches including Palm Beach and Eagle Beach, with their crystal-clear waters and white talcum-powder-like sands adorned with divi divi trees that always point to the west as they are under the influence of the trade winds that blow from the northeast. An optional excursion was offered to the Butterfly Farm near Palm Beach to observe and learn about this most colorful and lovely insect.
• Bimini, Bahamas – This Bahamian island, just 50 miles off Florida’s coast, was one of novelist Ernest Hemingway’s favorite escapes due to its great fishing. The island has also been associated to the legendary Lost City of Atlantis, with a theory holding that Bimini is the remnants of Atlantis. It consists of two islands: North Island and South Island. We opted to spend the day at the Resorts World Bimini Hilton with access to miles of sandy beaches via a complimentary shuttle, infinity pools, lazy river, spa, restaurants and all accommodations featuring balcony or terrace to better enjoy the breathtaking views of aquamarine waters. The Crystal Symphony offered several optional excursions including a stingray encounter at a secluded beach, so guests could feed and pet these beautiful creatures that have the aspects of angels with widespread wings as they swim in the sea.
• San Juan, Puerto Rico – We headed for Old San Juan, a short walk from the cruise terminal, and spent the day exploring this colonial city’s cobblestone streets, and more-than-500-year-old forts including El Morro, which has been protecting San Juan since the 16th century. Old San Juan has many shady plazas where visitors can enjoy a piragua—a shaved ice treat with tropical flavors—as well as many monuments, churches, restaurants, shops and parks including Pigeon Park, next to the 18th century Cristo Chapel, where we always feed the hundreds of birds that live there.

Bottom line: Our Caribbean cruise aboard the redesigned Crystal Symphony was memorable both for the idyllic locales we visited and for the lovely ship that took us there in comfort and style.
Posted by Linda Coffman, AKA Cruise Diva 46 comments: