Around The World on HAL’s Amsterdam 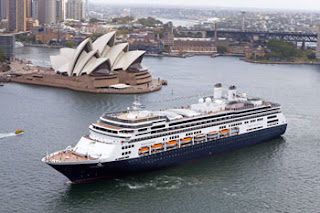 Since the time of Magellan, people have dreamed about circumnavigating the planet. This winter my husband Humberto and I were privileged to do so for the fifth time on Holland America’s Amsterdam.A true circumnavigation, roundtrip from Fort Lauderdale it was an epic voyage of 113 days visiting 45 ports—several for two days—on multiple continents and cruising along such diverse and picturesque areas as the Torres Straight in Australia’s Great Barrier Reef and the Norwegian Fjords.

Here are some memorable moments:


• In the Americas – Unforgettable were strolls along colonial streets in Santa Marta, Colombia and Lima, Peru, as well as a visit to the San Blas Islands where the Cuna Indians delight visitors with their precious craft of the “molas,” colorful layers of cloth applique representing birds, fish, snakes and other local fauna. On Easter Island (annexed by Chile, but largely Polynesian in culture) the enigmatic “moai,” statues carved out of volcanic rock mostly between 800 and 1600 A.D.—and some weighing up to 82 tons—captivated our attention.

• In French Polynesia – Stops in Tahiti and Bora Bora were among the loveliest in the itinerary with turquoise lagoons, green mountains, forests and waterfalls. In Papeete, Tahiti’s capital, we visited the Municipal Market with lots of local color, the waterfront Promenade that recalls the French Riviera and the Cathedral of the Immaculate Conception with its red steeple and wood-carved statue of Mary. On the two islands we spent time at resorts with overwater bungalows: the Tahiti InterContinental Resort & Spa and the Four Seasons Bora Bora for maximum enjoyment of the sea—ah!

• In Australia, Sydney called us with its Opera House, the Sydney Harbor Bridge (the intrepid can climb it!) and panoramic views from the Sydney Tower Eye. During a stop in Townsville we were able to enjoy Australia’s fabulous fauna at the Billabong Sanctuary, a natural reserve with adorable kangaroos and koalas, crocodiles, wombats, snakes and birds. At the Billabong Sanctuary visitors can cuddle a koala (unlike at parks in New South Wales, where it is against the law).

• In Asia, the Indonesian island of Bali was a highlight with its temples, rice terraces and crafts centers. Other Asian delights included a two-day visit to Singapore with its eye-popping architecture. We visited the SkyPark—a ship crowning the three towers of the Marina Bay Sands with panoramic views of the city-state—and the nearby ArtScience Museum designed in the form of a lotus flower. Additional Singapore highlights included the funicular to Mt. Faber, Sentosa Island with leisure activities, the “Merlion” (an iconic statue half lion, half fish), and the spectacular Gardens By The Bay. In Mumbai, India (Bombay during British colonial times) we took in the Gateway To India, an ornamental arch to commemorate a 1911 royal visit, and the Dhobi Ghat, the city’s legendary outdoor laundry.

• In the Middle East, an overnight in Aqaba, Jordan offered opportunities to visit the Rose City of Petra and Wadi Rum, and a call at Muscat, Oman, allowed for strolls on the lovely seaside Corniche and shopping in the exotic souq with its silver lamps that seemed they could harbor a genie, spices and all manner of merchandise. Those who wished to live out a 1001 Arabian Nights fantasy for the day could head for the Al Bustan Palace, A Ritz-Carlton Hotel. Formerly a royal residence, the hotel boasts beautiful Islamic architecture, a lovely stretch of private beach, 200 acres of gardens and views of the Al Hajar Mountains. The afternoon tea to harp music features local specialties and it was featured as an optional shore excursion on the Amsterdam.

• In Europe, Barcelona tempted us with treasures of Gaudí. Each time we visit the city we enjoy one of his amazing works including his Sagrada Familia Basilica, Parc Guell, Casa Batlló and Casa Mila (La Pedrera). And, of course, we enjoyed a stroll on Las Ramblas, arguably Spain’s most famous street, with its cafes, souvenir kiosks and “living statues.” In Oslo we visited the Opera House with its futuristic design that resembles a glacier in the fjord. We also took in the ancient Akershus castle, conveniently next to our cruise pier, and we marveled at Vigeland Park’s 200 sculptures. While in Amsterdam, we booked a tour to the lovely Keukenhof Tulip Festival, a world-famous springtime fest, with seven million flowers in bloom (spectacular!) and the World Cruise had a gift for us: an after-hours visit to the world-famous Rijksmuseum with its treasures of Rembrandts, Vermeers and other masters. Our exclusive visit came with complimentary transportation, beverages and local desserts—a memorable evening!

The 1,380-passenger Amsterdam whisked us from one port to another in comfort and luxury. Enrichment programs to immerse us in the cultures of the places we were visiting included a Polynesian group who conducted crafts classes and ukulele lessons and put on performances, a Maori team who taught us the famous Haka war dance while we were in New Zealand; a lavish Bollywood production while in Mumbai; and Celtic music performers while in Scotland and Ireland. Regionally-inspired dishes—at least two—were featured on the dinner menus each evening of the voyage. Special events included festive balls, themed dinners, a Mardi Gras party and a Mother’s Day Brunch.

Can you imagine Magellan enjoying these events as well as the ship’s pools, Jacuzzis, spa, gourmet restaurants, casino, cinema, show lounge and bars? I don’t know what he would have done, but Humberto and I already booked the Amsterdam’s 2020 World Cruise!
Posted by Linda Coffman, AKA Cruise Diva 37 comments: