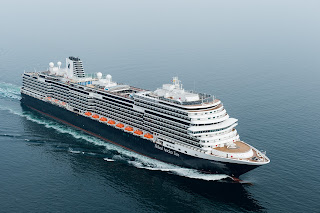 Each January, after a hectic Christmas season, my husband Humberto and I book a cruise—for us it’s the best remedy against the post-holidays blahs after the cooking and entertaining: a great way to relax and enjoy some alone time. Our latest January escape was a 10-day Southern Caribbean Seafarer on Holland America’s Koningsdam. It was a double Dutch treat: visits to the ABC Islands of the Netherlands Antilles: Aruba, Bonaire and Curacao on Holland America’s newest ship, not to mention the idyllic ports of Grand Turk in the Turks & Caicos and Amber Cove in the Dominican Republic.

Our first port of call was to have been Half Moon Cay, Holland America’s private island in the Bahamas that marked its 20th anniversary in 2017. Bad weather, including high winds, however, would have caused concern for tendering guests ashore, so Capt. Emiel deVries notified us he was cancelling the call as safety of guests and crew is the line’s highest priority, and on the bright side, we would then have three extra hours at our next port, Grand Turk.

In Grand Turk, where the weather was splendid, when passengers managed to tear themselves from the white-sand, aquamarine beach for a couple of hours there were various touring options including a tram ride to soft calypso music around the 7-1/2-mile long island of Grand Turk taking in Duke Street with old Bermudian-style homes, and views of talcum-powder-sand beaches. Several stops are made at various points of interest including one in town to browse for island crafts and souvenirs or visit the Botanical And Cultural Garden with native plants and a collection of cacti and succulents, and at salt ponds that date back to the 16th century, as well as at the Grand Turk Lighthouse with views of neighboring islands and friendly Grand Turk donkeys. Grand Turk was the only port on our itinerary where we saw signs of hurricanes of damage from Irma and Maria in the fall—a number of roofs were damaged and several were being worked on, but this did not detract from our enjoyment of the beach, the lighthouse, the donkeys and other sights.

Amber Cove, on the north coast of the Dominican Republic, near Puerto Plata, was our next stop and here sightseeing opportunities included beach and snorkeling breaks to Coconut Cove, tours to the colonial cities of Puerto Plata and Santiago, dolphin swims, sea lion encounters and even swimming with sharks at Ocean World Adventure Park. Cruise ship organized tours to Ocean World Adventure Park included a Day Pass for visitors who just wanted the opportunity to snorkel in the park’s Tropical Reef Aquarium and learn about marine mammals. Other activities available to Day Pass visitors include feeding exotic birds, walking through a tropical rain forest, and taking in the Dolphin Show, Shark Show, Sea Lions Show, and Tropical Bird Show. Day Pass visitors also have free access to the dolphin beach and the fresh water pool located in the Tiger Grotto.

Two Cruise With Purpose tours, Holland America Line’s program inspired in “giving back,” were also offered in Amber Cove in conjunction with Fathom Impact Travel, a company founded by Carnival Corporation for social impact journeys. One of these tours goes to the Cacao & Women’s Chocolate Cooperative in Puerto Plata where participants take part in a hands-on visit to a chocolate factory founded by women of the Dominican Republic in their search for meaningful work so they can support their families. At a local nursery, tour participants begin by preparing organic soil and planting cocoa seeds. In the chocolate factory, tour members work alongside the women of Chocal to transform the cocoa bean into a chocolate bar. Participants also help the women package the chocolate and prepare it for sale. By helping to improve production and increase sales, tour members also help the organization thrive so it can hire more local women. A second Cruise With Purpose tour went to a recycling micro-business, RePapel, founded by women.

Aruba, Bonaire and Curacao, the so-called “ABC Islands” of the Netherlands Antilles, the centerpiece of the voyage, are always a Dutch treat coming on a Dutch ship while enjoying along the way such delights as Dutch split pea soup, Dutch apple pie and Dutch almond cookies.

We arrived early and were able to disembark at 8 a.m. in the port of Willemstad, Curacao, with the all-aboard time being at 10:30 p.m., so we had lots of time to explore. We were glad: it is one of the most picturesque ports in the Caribbean with views of rows of Dutch-style architecture gabled houses in Caribbean ice-cream colors overlooking Sint Anna Bay, a waterway that divides the city in two and connects the Caribbean Sea to the protected Schottegat Bay. The historic center of Willemstad, founded in the 17th century, is a UNESCO World Heritage Site, and on previous cruises we had visited its highlights including its floating market, the distillery making the world-famous Blue Curacao liqueur, institutions like the Kura Hulanda museum, Fort Amsterdam (now the home of the governor of Curacao), and the Queen Emma Bridge, a floating bridge that unites the east side of the city, the Punda, with the west side, Otrabanda. The picturesque pontoon bridge is affectionately called “the Swinging Old Lady of Curacao” by locals.

We re-visited some of these highlights and we also booked a ship’s tour to the Curacao Ostrich Farm. On the way to the farm, a photo stop was made at Riffort village with panoramic views of Willemstad’s city center, the narrow port entrance, the colorful Dutch colonial-style houses and Fort Amsterdam. A safari truck at the Ostrich Farm took us to explore and we were able to hand-feed the impressive birds. A souvenir shop at the farm offers African art and other merchandise. The tour also included a visit to another of Curacao’s industries, the Aloe Vera Farm, where we were shown the process of extracting juice from the plant and learned about the beneficial powers of this natural product.

In Aruba, sightseeing opportunities included tours to scenic highlights. During a half-hour drive from the cruise pier in the capital of Oranjestad to the picturesque California Lighthouse, the tour passes through the island’s arid terrain (Aruba lies below the hurricane belt, off the coast of Venezuela), an ideal habitat for cacti and divi-divi trees that always point to the west, in the direction of the trade winds that blow from the northeast. Stops are made at the Alto Vista Chapel, a yellow structure in Dutch style that dates from the 18th century, and the “Baby Natural Bridge,” a small rock bridge carved by the wind and sea erosion—it is located next to the ruins of the famous larger bridge that collapsed in 2005 and had been an icon of the island. A final stop is made on this island tour at the Casibari Rock Formations, where giant boulders appear as if strewn about by a gigantic hand.

A selection of snorkel and diving programs was available while in Aruba and many passengers opted for a visit to the island’s famed Palm Beach, a two-mile strip of talcum-powder-quality sands and aquamarine waters that often makes the “Top 10 Beaches of the Caribbean” lists. Palm Beach is home to high-rise hotels, restaurants and bars, and is dotted with water sports concessions, so passengers may opt for a day-room at one of the hotels for an idyllic and comfortable day at the beach, or simply wear their bathing suit under a cover-up and just go for a dip in the warm, crystal-clear water.

Bonaire, a boomerang-shaped isle in the ABC Islands, is known for its world-class diving with more than 80 dive sites and a coral reef encircling the entire isle. We set off on an island tour following a route north along the coast to take in some of isle’s highlights. We made a stop at Lake Goto, Bonaire’s land-locked saltwater lagoon, to see the long-legged pink flamingos that make their home in the area. The flamingos’ plumage is pink because of chemicals in the food they eat: shrimp and algae, our guide told us. Other sights in our agenda included Rincon, the oldest settlement in the ABC islands, the Rose Inn for a taste of the liquor made from the cadushy cactus and to learn about its distilling process, and Seru Largu, atop a mountain for panoramic views of Kralendijk and the southern part of the island. As we made our way back to Kralendijk, we stopped at the salt pans with their pink color and towering white mounds of dry salt.

The ship whisking us from one island to another, the 2,650-passenger, 99,500-ton Koningsdam, the first of Holland America’s new Pinnacle Class, is a great base from which to explore in comfort and luxury. The line’s newest ship, launched in 2016, she is a stylish home at sea with a $4.1 million art collection including an impressive $600,000, 7.5-ton stainless steel sculpture, titled “Harps” in the Atrium that spans three decks and is based on a concept by designer Adam D. Tihany.

In this floating palace—and I mean that literally—a pampering staff, a hallmark of Holland America, catered to our needs and whims. When we worked up an appetite ashore, we had an ocean of culinary delights onboard. In addition to the stunning main restaurant, The Dining Room, light, airy and elegant where the fare for included five-course dinners is gourmet and the service attentive and friendly, the ship features fine-dining options at alternative restaurants Sel de Mer, a French seafood brasserie featuring such delights as fresh oysters, bouillabaisse and salt-crusted whole fish (cost is a la carte), and an immersive farm-to-table concept dinner experience in the Culinary Arts Center, presented by Food & Wine magazine (cost is $20, $39 with wine). The Grand Dutch Cafe offers traditional Dutch treats and European beer (a la carte), and a Lido Market features themed serving stations (included). For a snack or light meal there are juicy burgers and hot dogs at Dive-In, and delicious slices at New York Pizza (included). But there are still many more temptations for the taste buds at the Pinnacle Grill ($35 per person—I always order the sinful Chocolate Volcano Cake for dessert!), Canaletto Italian restaurant ($15) and pan-Asian Tamarind alternative restaurants ($25—I am addicted to the delectable spring rolls!).

When our days and evenings were done we retired to our comfortable ocean-view stateroom with good closet space, loveseat, desk, big screen television and bath with walk-in shower. In the accommodations department, the Koningsdam features Holland America Line's first purpose-built staterooms for families and solo travelers among its 1,331 guest accommodations—something sure to be appreciated by that clientele. And when our 10-day voyage was done, we sure wished we had booked back-to-back cruises for even more rest and relaxation after the holidays!