Boldly Going ... Where No Other Cruise Has Ventured 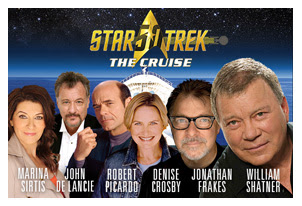 Over the years some of our favorite cruises have been full ship charters hosted by our friends at Entertainment Cruise Productions. When it comes to entertainment, the folks at ECP go out of their way to do everything right every time. In fact, for more than 15 years, Entertainment Cruise Productions has produced the world's most amazing music full-ship charters. The Jazz Cruise (15 years) and The Smooth Jazz Cruise (13 years) are among the most heralded cruise programs ever presented and continue today to sell out year after year. During that time, they have also produced cruises featuring rock ’n’ roll, Elvis Presley, R&B, country music, and soul. In the past year, they have launched The 80s Cruise and The Gospel Music Cruise, so their musical reach has been boundless.

Recently, CBS asked Entertainment Cruise Productions to consider producing an iconic experience cruise celebrating the 50th anniversary of “Star Trek.” As they do for all their programs, they dove into the deep end of the pool and assembled an amazing list of past and current “Star Trek” personalities, including William Shatner, Jonathan Frakes, John de Lancie, Marina Sirtis, Robert Picardo, James Darren and more. We are now producing the first-ever licensed “Star Trek” cruise! If you want to be beamed aboard, check the cruise out at startrekthecruise.com. Going where no cruise has gone before, you’ll sail from Miami aboard Norwegian Pearl from Miami in January 2017.