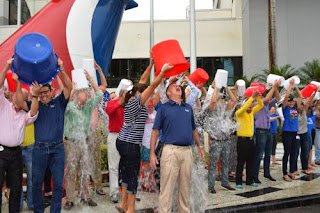 Leave it to Carnival Cruise Lines to take the #IceBucketChallenge up a notch! Here's the way the #IceBucketChallenge works: participants are encouraged to pour a bucket of ice water over their head and then challenge others to do the same or make a donation to fight amyotrophic lateral sclerosis (ALS), also known as Lou Gehrig’s Disease within 24 hours.

The popular cruise line enlisted all twenty-four of its “Fun Ships,” as well as President and CEO Gerry Cahill, to participate in the #IceBucketChallenge, designed to raise much-needed awareness and funds for ALS. Carnival is also making a $100,000 donation to the ALS Association. Additionally, Carnival’s Chairman Micky Arison was challenged, accepted it—his video is on Instagram—and he will match the cruise line’s donation to the ALS Association with a $100,000 donation of his own.

Carnival’s newest ship, Carnival Breeze, was the first ship to rise to the challenge with Cruise Director Matt Mitcham throwing down the gauntlet by dumping the entire contents of the 150-gallon PowerDrencher tipping bucket and then challenging the line’s other 23 ships to take up the cause.

Team members from the 23 ships, which are sailing in regions spanning the Caribbean, Alaska, the West Coast, and Australia, were up to the task, with shipboard personnel undergoing their own below-freezing drenching to support ALS research, treatment and education efforts. Finally, President and CEO Gerry Cahill, pictured above surrounded by dozens of the company’s employees, underwent his own frigid encounter at the company’s Miami headquarters.

Take a look below to see the chilling challenge aboard the Carnival fleet and in Miami—where I bet the water was more refreshing than in Alaska.

otr214425
INTERNATIONAL CONCEPT OF WORK FROM HOME
Work from home theory is fast gaining popularity because of the freedom and flexibility that comes with it. Since one is not bound by fixed working hours, they can schedule their work at the time when they feel most productive and convenient to them. Women & Men benefit a lot from this concept of work since they can balance their home and work perfectly. People mostly find that in this situation, their productivity is higher and stress levels lower. Those who like isolation and a tranquil work environment also tend to prefer this way of working. Today, with the kind of communication networks available, millions of people worldwide are considering this option.

Women & Men who want to be independent but cannot afford to leave their responsibilities at home aside will benefit a lot from this concept of work. It makes it easier to maintain a healthy balance between home and work. The family doesn't get neglected and you can get your work done too. You can thus effectively juggle home responsibilities with your career. Working from home is definitely a viable option but it also needs a lot of hard work and discipline. You have to make a time schedule for yourself and stick to it. There will be a time frame of course for any job you take up and you have to fulfill that project within that time frame.

There are many things that can be done working from home. A few of them is listed below that will give you a general idea about the benefits of this concept.

Baby-sitting
This is the most common and highly preferred job that Women & Men like doing. Since in today's competitive world both the parents have to work they need a secure place to leave behind their children who will take care of them and parents can also relax without being worried all the time. In this job you don't require any degree or qualifications. You only have to know how to take care of children. Parents are happy to pay handsome salary and you can also earn a lot without putting too much of an effort.

Nursery
For those who have a garden or an open space at your disposal and are also interested in gardening can go for this method of earning money. If given proper time and efforts nursery business can flourish very well and you will earn handsomely. But just as all jobs establishing it will be a bit difficult but the end results are outstanding.

Freelance
Freelance can be in different wings. Either you can be a freelance reporter or a freelance photographer. You can also do designing or be in the advertising field doing project on your own. Being independent and working independently will depend on your field of work and the availability of its worth in the market. If you like doing jewellery designing you can do that at home totally independently. You can also work on freelancing as a marketing executive working from home. Wanna know more, email us on workfromhome.otr214425@gmail.com and we will send you information on how you can actually work as a marketing freelancer.


Internet related work
This is a very vast field and here sky is the limit. All you need is a computer and Internet facility. Whatever field you are into work at home is perfect match in the software field. You can match your time according to your convenience and complete whatever projects you get. To learn more about how to work from home, contact us today on workfromhome.otr214425@gmail.comand our team will get you started on some excellent work from home projects.


Diet food
Since now a days Women & Men are more conscious of the food that they eat hence they prefer to have homemade low cal food and if you can start supplying low cal food to various offices then it will be a very good source of income and not too much of efforts. You can hire a few ladies who will help you out and this can be a good business.

Thus think over this concept and go ahead.