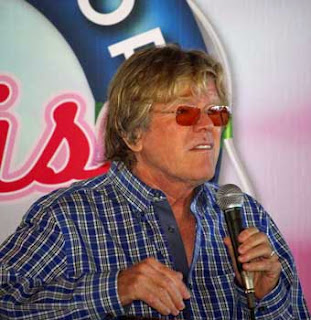 Those of us who were teens in the 60s remember when groups from Great Britain burst onto the scene and changed the sound of rock and roll—at least temporarily. For me, the Beatles weren’t a big deal, but when I had the opportunity to attend a Herman’s Hermits concert, I jumped on it. Opening for them were the Righteous Brothers and their singing was terrific. Unfortunately, when Herman’s Hermits, led by Peter Noone, took the stage thousands of teenybopper girls began to scream. Loudly. And they kept it up the entire set.

Now, nearly fifty years later, I finally got to actually hear Peter Noone and Herman’s Hermits on stage aboard the Malt Shop Memories Cruise. He’s just as cute as he was back in 1965—I wish I’d aged that well—and he’s quite a showman. Noone quipped that he often gets mistaken for Nick Nolte and that he’s the love child of Elton John and Mick Jagger. It’s all in fun and he obviously doesn’t take himself seriously. However, his band and especially his vocals were seriously good. Back in the day they sold 18 million records and even today it’s pretty obvious why.

Noone’s musical versatility ranged from covers of songs by Johnny Cash, the Monkees, the Rolling Stones, and Tom Jones to classics like Two Silhouettes on the Shade and Wonderful World. I particularly enjoyed, Mrs. Brown You’ve Got a Lovely Daughter, A Kind of Hush All Over the World, and the rousing I’m Henry the Eighth. That last tune brought the audience to their feet to sing along.

Moving from Great Britain to New Jersey, our first night on board ended with a Vegas-style show by former Saturday Night Live cast member Joe Piscopo, who does a mean Sinatra imitation. He opened by saluting our military and invited an Army veteran onstage to hold a flag that had flown in Iraq while he led the audience in The Star Spangled Banner as Sinatra would have performed it. After his serious start, he moved on to comedy and even showed a clip of himself as Sinatra and Eddie Murphy as Stevie Wonder in a Saturday Night Live skit.

It was a late ending to a very fulfilling—and most entertaining—day.