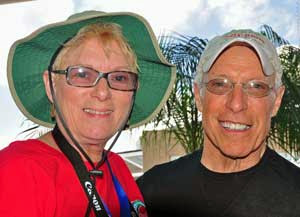 Each year the Malt Shop Memories Cruise is hosted by radio personality Jerry Blavat—the ‘boss with the hot sauce’ who has been a part of the music industry for many years and who knows all the major artists and musicians. While Blavat is probably not a household name outside Philadelphia and the Northeast, no one will leave Eurodam without feeling that they know him personally—Jerry’s one of the most outgoing men you’ll ever meet and a great deal of fun on stage and up close. 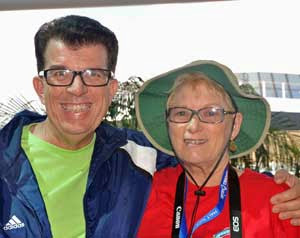 That’s the beauty of the Malt Shop Memories Cruise. The artists, no matter how brightly their star still shines, are just folks on board—they mingle with guests and are very approachable. Jerry posed with the Cruise Diva during the Beach Party, as did George Trullinger, who brings Buddy Holly alive onstage (and he also does a mean Ed Sullivan imitation).

We have run across Brenda Lee several times on board and she’s very generous with her time, talking with fans and posing for photos. She seems to be having a great time and attends the concerts to enjoy her fellow artists when they take the stage. She’s adorable and so tiny! 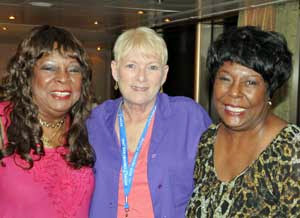 One night at dinner in the Lido Buffet we happened to notice Martha Reeves and one of the Vandellas was seated at the next table. They also graciously posed for a photo with Cruise Diva. Such nice and funny ladies. Miss Reeves chatted with everyone who stopped by and spent a lot of time with guests to get just the right picture to remember her by.

Later, while having after-dinner drinks by the aft pool, we chatted at length with Brenda Lee’s personal hairdresser and had a great time laughing along as he and Miss Lee’s daughter learned to “dance like a Vandella.”

When we disembark Eurodam, we’ll have many, many memories to savor and share.