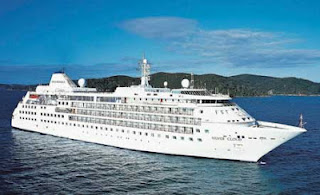 The “70th Anniversary of D-Day Cruise” will kick-off on May 30, 2014 in Lisbon, a center of intrigue and espionage during WWII. Cruise-goers will have the chance to visit many of the historic sites in the old city before sailing north to St. Nazaire on the Brittany Coast. During WWII, this historic port featured a dry dock important to German naval forces and served as a base for the German U-boats. It was the target of a famous British commando raid in 1942.

Following the trip to St. Nazaire, the ship will cruise onto the English Channel, stopping at the town of St. Peter Port where many German military installations still remain. There the group will visit with locals who survived the war under German occupation. The Silver Cloud will then visit the English port of Portsmouth before docking for five nights in the Caen Canal in the heart of Normandy.

During the Normandy stopover, daily touring opportunities will be offered to sites including the D-Day invasion landing beaches, the Abbey de Caen, the Memorial de Caen, the Airborne Museum and Hill 314 at Mortain. Many of these visits will include unique accounts from veterans and French civilians who experienced the war firsthand. The group will also take part in the 70th Anniversary ceremonies at the Normandy American Cemetery overlooking Omaha Beach and will visit the Utah Beach Museum and the Memorial de Caen for special after-hours receptions. The Mayor of Caen has invited the group to tour the famous 11th Century Norman Abbey for a final farewell reception on behalf of the city. Further stops will include Pointe du Hoc, Sainte-Mere-Eglise, Pegasus Bridge as well as British and Canadian beaches. Additional cultural tours will include Bayeux, Mont Saint-Michel, Paris and more.

“Our ‘70th Anniversary of D-Day Cruise’ is a once-in-a-lifetime opportunity for scholars of WWII, history buffs and those who experienced World War II firsthand to visit these famous sites during this momentous anniversary,” said Dr. Gordon H. “Nick” Mueller, president and CEO of The National WWII Museum. “It is also an ideal trip for luxury travel enthusiasts, as the ship’s amenities are truly top-of-the line.”

Costs for the cruise vary depending on accommodations, but include food and beverages, luxurious suite accommodations, lectures and tours. Airfare is not included as part of the cruise package. For more information, please visit ww2museumtours.org or call 877-813-3329 x 257.

The National WWII Museum tells the story of the American experience in the war that changed the world – why it was fought, how it was won, and what it means today. Dedicated in 2000 as The National D-Day Museum and now designated by Congress as America’s National WWII Museum, it celebrates the American Spirit, the teamwork, optimism, courage and sacrifice of the men and women who fought on the battlefront and the Home Front. For more information, visit nationalww2museum.org.