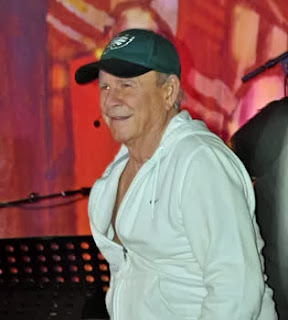 Despite the 50 knot winds that prevented us from tendering ashore at Holland America Line’s private island, it was a day of fun and activities for the Malt Shop Memories Cruise aboard Eurodam.

One of the most popular activities was Bobby Rydell’s cooking class (pictured here). After explaining why he had to miss last year’s cruise (he’d had a double organ transplant—liver and kidney—as well as a double heart bypass), Bobby demonstrated how to prepare Dijon Garlic Pork Chops to a standing room only crowd. The dish sounds yummy and I’ll share his recipe later.

For now, let’s move on to a full evening of music. Our show in the main showlounge was the incomparable Neil Sedaka, who’s been a creator and innovator in show business for sixty years. He began performing with The Tokens and went on to make other artists stars. Those who’ve recorded his songs are too numerous to list, but among the notable—and perhaps surprising—they include Abba, Johnny Mathis, Patsy Cline, Elton John, Clay Aiken, Rosemary Clooney, Carole King, Neil Diamond, Elvis, and many others. As he took the stage, Neil received a standing ovation, just one of many during his show as he sang the songs we know him for, such as Happy Birthday Sweet 16, Calendar Girl, and Living Right Next Door To An Angel, as well as some he wrote for others. For instance, Sedaka put Fort Lauderdale on the map with his song Where The Boys Are, performed by Connie Francis in the movie of the same name.

Sedaka went on to explain that he studied to be a concert pianist and his parents weren’t too happy with his detour to rock and roll. However, they were pleased when 50 million copies of his records sold from 1958 to 1963, at which time he stopped recoding when the British music “invasion” landed. Happily, he picked up right where he left off ten years later and even rewrote the words to some of his songs for children—for instance Where The Toys Are. Near the end of his show he brought an old friend on stage for a duet—Jay Siegel who he got together with in high school to sing doo wop and form the group The Tokens (also performing here on the Malt Shop Memories Cruise). Truly one of the stars who makes up feel young again, Sedaka closed his show with a slow version of Breaking Up Is Hard To Do. It was hard to leave the showlounge after an incredible performance like his.

With the night still young we made our way to the Jungle Room for the Elvis Comeback Special, featuring four talented Elvis Tribute Artists and then completed our musical evening with A Night At B.B. King’s Club, a Holland America staple.