The Malt Shop Memories Cruise, See You Next Year 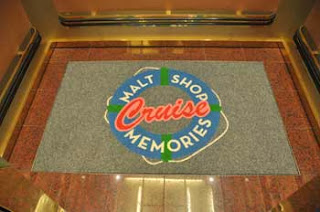 It’s only been a few days since the last thing we saw on board was the elevator carpet as we disembarked Holland America Line’s Eurodam and left this year’s Malt Shop Memories Cruise with songs in our hearts and plans to return next year. As our master of ceremonies Jerry Blavat said before the last show the previous night, he would like the cruise to go on forever. We make new friends year to year and we agree with Blavat that you never grow old as long as you love rock and roll.

Little Anthony & The Imperials closed our cruise with a show that was certainly one worth remembering. We first saw them perform in person on the maiden Malt Shop Memories Cruise and despite the retirement of Clarence Collins—a founder of The Imperials—they still have that wonderful groove and sound we can’t get enough of. To the strains of All By Myself, Little Anthony took the stage alone and wowed the audience with his high notes and distinctive clear voice. He became emotional when The Imperials joined him onstage and they began singing their hits—Tears On My Pillow; Shimmy, Shimmy, Ko Ko Bop; I'm On The Outside (Looking In); Goin' Out Of My Head; Take Me Back; and Hurt So Bad, which Little Anthony revealed is his favorite. A standard written for the group, he also said their recording of Hurt So Bad sold over four million copies and he feels it was the ticket for their 2009 induction into the Rock & Roll Hall of Fame.

The group also displayed their diversity by singing I Heard It Through The Grapevine, Do You Think I’m Sexy, Lucille, and the more contemporary Every Breath You Take. They simply took our breath away and we were sad when the show ended and it was time to pack for home.

It has been a privilege to sail with and enjoy so many artists. Happily, as long as they can perform, classic rock and roll will never fade away.

The 2014 Malt Shop Memories Cruise features the return of Dion to the line-up of stars, along with The Temptations, Brenda Lee, Herman's Hermits starring Peter Noone, Jan & Dean's Beach Party starring Dean Torrence, Martha Reeves & The Vandellas, Ricky Nelson Remembered with Matthew & Gunnar Nelson, and much, much more. Hope to see you there!