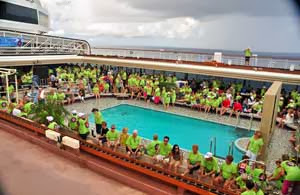 Things really got rocking with the Malt Memories Cruise signature tee-shirt party. Before sailing everyone received a shirt with their bon voyage package to wear at the pool party where the drinks are free and the music and dancing are the hottest two hours afloat.

Then we were treated to two Q&A sessions with Shirley Alston Reeves and Bill Medley, during which they shared a little insight into what it was like on the road back in the early days of rock ‘n roll, as well as what they are up to today. For instance, Shirley related that while on tour with Dick Clark, he always said the Shirelles were the most punctual act on the bill. One night the zipper broke on one singer’s dress and since they always dressed alike on stage they all had to change. That took a while and when their intro music began playing and they were late making their entrance, Dick Clark thought they were playing a joke on him. 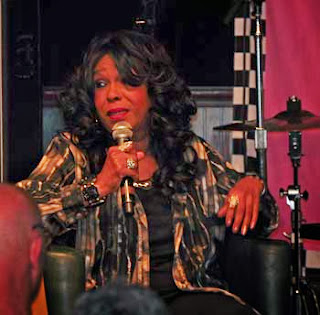 Bill Medley of The Righteous Brothers now appears often at Branson after being invited to perform there by Paul Revere and The Raiders when his son was singing lead for the group. Medley also revealed that he lost his voice at one point and had surgery to remove nodules on his vocal chords. Told he’d never sing again, he was able to regain his voice after daily vocal lessons with his high school choir teacher. Interestingly, he quit school at 16 and now the school’s auditorium is named for him. When he spoke of his long-time singing partner, Bobby Hatfield, who died ten years ago, he became quite emotional. Medley dedicates his shows to his missing Righteous Brother.

By the time we entered the showlounge for performances by those two artists we felt like we had a connection with them. And then Shirley Reeves, the last remaining Shirelle, took the stage with her current singing partners right on time and blew us away with Going To The Chapel, Mama Said, Baby It’s You, Tonight’s The Night (which she wrote), Foolish Little Girl, and Everybody Loves A Lover. Shirley nearly brought the house down with the Shirelles’ number one hit, Will You Still Love Me Tomorrow (written by Carole King). That was followed up by their greatest hit, Soldier Boy. Shirley and the group’s interaction with the audience on those two numbers got everyone singing along. 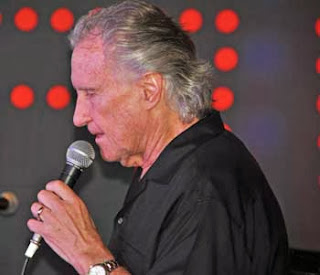 Their set concluded with a medley of rock ‘n roll hits—very appropriate as the next star to take the stage was Bill Medley, who began with Unchained Melody, which became a hit all over again when it was featured in the movie “Ghost.” Another of his songs that gained almost cult status was I’ve Had the Time of My Life, which he recorded with Jennifer Warnes for the movie “Dirty Dancing.” On stage aboard Eurodam Bill Medley sang it with his lovely and talented daughter McKenna. He continued with You’re My Soul and Inspiration and a new song that will be on an album to be released next year—This Will Be The Last Time—emotional and powerful, it will be a must-have for his fans. After a medley of his favorite rock ‘n Roll hits, he closed his show with You’ve Lost That Loving Feeling to a standing ovation.

The night was young so we put on our poodle skirts and bobby sox before heading to the pool for the Sock Hop Dance Party with our Malt Shop friends, both old and new. As Bill Medley said earlier,”Life is about friends and family—everything else you can get at WalMart.”