The Malt Shop Memories Cruise Spends A Day At Sea 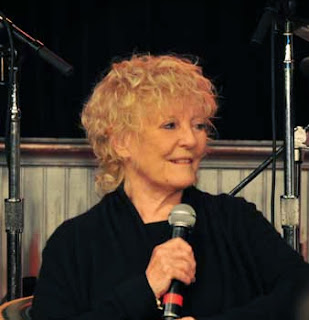 A day at sea is usually a good time to sleep in, but had we done so we’d have missed Music Trivia, ballroom dance lessons with Jay Siegel, a twist party on deck, and a Q&A session with the gracious Petula Clark, who revealed that she began her career in the movies in 1944 as a child actor. She didn’t sing with her, but shared the same stages in live shows with another icon, Julie Andrews, before Ms. Clark became a part of the ‘British invasion’ with her hit Downtown. Mel and I had the opportunity to chat with her and found we have something in common—our sons are both golfers.

Prom Night, the formal evening on The Malt Shop Memories Cruise, began with shows in the Vista Lounge. First on the stage was Lesley Gore who charmed the audience with a bit of her history—she started out at age 16 with It’s My Party, which became a big hit. Moving forward, her producer—the great Quincy Jones—brought her a follow-up, It’s Judy’s Turn To Cry. At the time Ms. Gore felt was a bit mean spirited. However, she’s grown proud to have the ‘bitchiest’ song of the 60s. She doesn’t like to call her music ‘oldies’—she prefers the term ‘classic hits.’ Naturally, she sang both of those as well as That’s The Way Boys Are; Sunshine, Lollipops, and Rainbows; Baby I Know; California Nights; and her favorite, You Don’t Own Me.

Next up was the incomparable Bobby Rydell who took the stage with the upbeat Wild One and his last million selling record, Forget Him. His career also included the movie “Bye Bye Birdie” in which he starred as Ann Margret’s boyfriend, Hugo Peabody. As he sang the title song and others from the movie score a montage of scenes from the film took us back to a simpler time. Performing That’s Why The Lady Is A Tramp, as well as Mack the Knife, Dream Lover, and Beyond The Sea as a tribute to his good friend Bobby Darin, Rydell demonstrated that he’s truly a showman in the spirit of the great Frank Sinatra. Here’s a bit of trivia… did you realize the high school in the movie “Grease”—Rydell High—was named for Bobby?

The second show opened with The Crystals, one of the hottest of the ‘girl groups’—who haven’t slowed down and are still recording. They led off with Da Doo Run Run and followed up with more of the hits we all remember—And Then He Kissed Me, He’s Sure The Boy I Love, and their number one hit He’s A Rebel. Their newest album will include Rescue Me, which brought the audience to their feet.

Also bringing everyone out of their chairs was The Four Tops. Like The Crystals, today’s group only includes one original member, but who cares when they perform such memorable hits as 1964’s Baby I Need Your Loving and dedicate their show to their fallen brother Tops. They had us dancing in the aisles to My Girl, Ain’t No Woman Like The One I Got, Reach Out And I’ll Be There, Standing In The Shadows of Love, and of course I Can’t Help Myself (Sugar Pie Honey Bunch). It’s not just Malt Shop Memories Cruise guests on board who enjoyed the show—even Petula Clark was in the audience and one of The Four Tops sang out a bit of I Couldn’t Live Without Your Love in her honor.

What a day! And it wasn’t over until the King and Queen were crowned at the prom poolside!