Rolling on the River Seine Aboard Vantage River Venture 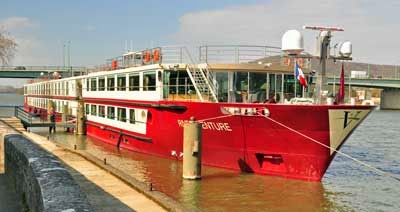 After an overnight flight to Paris we arrived bright and very early in the morning to be met by a lovely Parisian lady bearing a paddle with the name of our river boat on it—the highly personalized service of Vantage Deluxe World Tours had begun.
When the transfer van delivered us to River Venture, docked on the Left Bank of the River Seine, Captain Francois Bertin extended a personal greeting and our river cruise was set to began. Check in on board was a breeze as there were only seven of us in the earliest transfer from the airport. As we arrived so early for River Venture’s inaugural sailing on the Seine, a light breakfast was offered—a real treat after airline food. 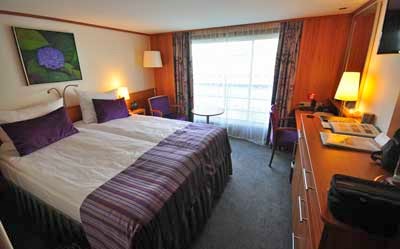 It was also a treat to settle into our category C stateroom 328, a restful retreat with a view across the river and a French balcony with floor-to-ceiling slider for fresh air. At 165 square feet, it is a compact space, yet efficiently laid out with a small sitting area and table alongside an extremely comfortable double bed that can be converted to two twins. Along one wall, a vanity/desk, a second chair, and ample storage in a dresser with four large drawers and enclosed shelves rounded out the furnishings. Above the dresser a large flat-screen television featured an infotainment system featuring international news channels, a music station, and movies on demand. Two closets were ample for our wardrobe and would have held much more than we packed.
A hair dryer is provided and US and European plugs are located alongside the vanity desk, which also featured a clock radio that doubled as an iPod/iPhone docking station. Bottled water was also provided upon our arrival. An ice machine just down the passageway was available to fill the ice bucket.

As expected, the bathroom was also compact; however, it was more than large enough for one person’s use at a time. A surprisingly generous sized shower had a glass door—no steaming up the entire bathroom during a hot shower—and L’Occitane de Provence amenities lined the glass shelf above the sink. Below the sink, enclosed storage for our own toiletries was also more than large enough. One of our favorite features was one we have at home—a shaving/makeup mirror with a magnifying side that extended above the sink.

With only 134 passengers on board, and our early arrival, luggage appeared in no time and we settled into our home for the next four days and were ready to begin our river adventure. First stop, Conflans to visit the Palace of Versailles.