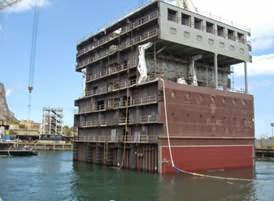 When a cruise line wants to expand its capacity it doesn’t necessarily have to start from scratch and build an entirely new ship. The process of “stretching” ships is a tried and true method to accomplish expansion and yesterday MSC Cruises began the process of physically enlarging the MSC Armonia, the first of four ships in the line’s fleet to undergo the Renaissance Program. During an event at Fincantieri shipyard in Palermo, Sicily, the separated 14,000 ton bow of the MSC Armonia slowly advanced 30 meters away from her stern to allow a new pre-built 24-meter section to be inserted midship.

The procedure marked a key milestone in the $273 million Renaissance Program, which will enlarge and enhance the MSC Armonia, MSC Lirica, MSC Sinfonia, and MSC Opera, giving them all an array of new improvements and amenities and adding up to nearly 200 new staterooms per ship. After the Renaissance Program, MSC Armonia’s environmental impact will also be significantly reduced. She will receive a new hull treatment to minimize drag and lower water resistance, considerably reducing fuel consumption. In addition, LED technology in all public spaces on the ship will mean less energy is consumed on board. A Variable Speed Drive Inverter will also be installed, an energy-saving system that significantly reduces the ship’s electricity consumption by adjusting it in line with operational conditions. Finally, a new design of propeller blade is being studied by MSC Cruises’ blade manufacturer to maximize efficiency and lower fuel consumption even further. 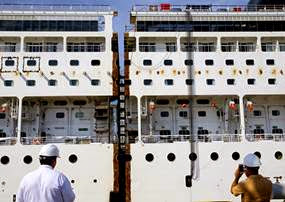 Additional enhancements that will be available when the cruise begins sailing again on Nov. 17 include new areas for the Baby Club built in partnership with Chicco; a new Mini Club, Young Club, Junior Club, and Teen Club; new exciting features in the buffet as well as extended hours; new lounge area and an extended restaurant; an additional library; upgrades to the MSC Aurea Spa; and a completely new spray park, with a pathway of water features and water cannons.

MSC Armonia entered dry dock on Aug. 31 and will remain on site for 11 weeks, until resuming service on Nov. 17 with a one-off inaugural Mediterranean cruise from Genoa to the Canary Islands.

Wow is just the simple word that may explain that how much I liked it. It was nicely stuffed with the material I was looking for. It is great to be here though by chance.
armonia msc cruises