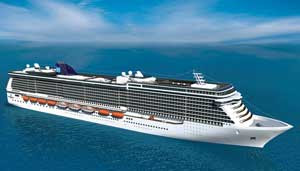 It takes a lot to get New Yorkers to take notice, but Mayor Michael R. Bloomberg was on hand with Norwegian Cruise Line CEO Kevin Sheehan yesterday to announce that that Norwegian’s new state-of-the-art 4,000 passenger ship, Norwegian Breakaway, scheduled for delivery in April 2013, will make New York City her year-round home port. Beginning in May 2013, Norwegian Breakaway—which will be the largest ship ever to home port in the City—will replace Norwegian Star, and embark on a minimum of 88 cruises from the Manhattan Cruise Terminal through March 31, 2015. The ship calls will bring an estimated 140,000 additional embarking passengers into New York City over two years, resulting in an estimated $35 million in additional direct spending.

“New York is not only one of our top markets, but also my hometown,” said Norwegian Cruise Line Chief Executive Officer Kevin Sheehan. “Therefore, I am thrilled to announce that New York will be the year-round home for our next generation Freestyle Cruising ship, Norwegian Breakaway. In addition, we are offering an exciting inaugural summer itinerary cruising to the beautiful island of Bermuda, a much sought-after summer destination.”

Norwegian Cruise Line broke ground (or parted the waters) as the first cruise line to homeport year-round in New York City beginning in 2003. Since then, the company has been committed to bringing its newest and largest ships to the Big Apple, with two ships calling in New York City since 2005. In 2013 alone, Norwegian Breakaway is expected to make 34 calls at Manhattan Cruise Terminal (MCT). Norwegian Gem will continue to call year-round at MCT as well, with an expected 47 calls, and Norwegian Star will make 15 calls in 2013 before being replaced. In total, Norwegian Cruise Line ships will bring approximately 285,000 embarking passengers into New York City in 2013, generating approximately $70 million in direct spending in the City, a $13.5 million increase due to the additional passengers on Norwegian Breakaway.

In addition, Norwegian also announced that pop icon and America’s most popular living artist, Peter Max, has been commissioned to paint the signature hull artwork for Norwegian Breakaway. This is the first time Norwegian has asked a well-known artist to paint the hull artwork on one of its ships. With paintings on exhibition in hundreds of museums and galleries worldwide, Peter Max and his vibrant colors have become part of the fabric of contemporary culture. Max has been successively called a Pop Icon and the United States’ "Painter Laureate." Max has achieved his place in history having painted for various Heads of State, including six U.S. Presidents.

Currently under construction at Meyer Werft in Germany, Norwegian Breakaway will be 144,017 gross tons and have 4,000 passenger berths. Norwegian Breakaway, and sister ship Norwegian Getaway (scheduled for delivery in April 2014), will take the best of the best from all of Norwegian’s existing ships, drawing on the line’s experience of having launched 10 ships in the past 10 years—starting with Norwegian Star and Sun in 2001 and culminating with the launch of Norwegian Epic in 2010. To date, the company has revealed details on all of the ships’ staterooms which combine the form and function of the line’s Jewel class ships’ staterooms with the modern and contemporary design touches of Norwegian Epic.You can find details about them here on the Cruise Diva blog at:

Further information on Norwegian Breakaway and Norwegian Getaway can be found at NCL.com/Breakaway.

Norwegian Breakaway’s New York to Bermuda cruises are scheduled to go on sale to Latitudes members, Norwegian’s frequent guests, on Friday, Oct 14, 2011 and to the public on Monday, Oct 17, 2011.