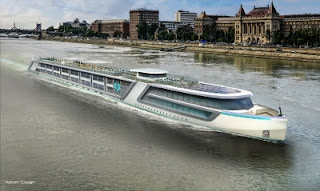 Poised to bring "true luxury" to the European river cruising experience, Crystal Cruises has unveiled the itineraries for its five new luxury river yachts and announced that voyages from 2016 through 2018 are now open for booking. The newly acquired and redesigned Crystal Mozart will sail in July 2016, and the four newly built vessels, Crystal Bach, Crystal Debussy, Crystal Mahler, and Crystal Ravel will launch in June and August 2017.

"It's truly thrilling for us, as well as our loyal guests and new-to-Crystal travelers, as more details of what's in store for Crystal River Cruises unfold," said Edie Rodriguez, president and CEO of Crystal Cruises. "We are going to deliver the most luxurious river experience in the industry with a combination of innovative vessel designs, unmatched guest service and fascinating itineraries."

The river yachts will maintain the luxurious Crystal Experience, featuring all-inclusive amenities, elegantly-appointed suites, and six-star service for which the cruise line is known. Crystal River Cruises' itineraries will offer a fresh take on traditional river cruising, focusing on longer and overnight stays and daytime cruising, in addition to sailing less-traveled routes to avoid congestion of other vessels in port.

Crystal Mozart (The Danube River), maiden voyage July 13, 2016—The queen of European river cruises is currently being redesigned and will emerge in 2016 boasting Crystal's signature style and public spaces, accommodations (160 guest capacity), and special touches. Keeping close to the Austrian roots of its namesake, the river yacht will sail two distinct itineraries of 10 and 11 nights along the Danube, plus a special 10 to 13 night Christmas and New Year's Eve voyage.


• Danube's Capital & Wachau Valley—Taking travelers through the UNESCO World Heritage Site of the Austria's Wachau Valley, lined with picturesque towns, terraced vineyards, and the stunning charm and architecture of Durnstein, Melk, Linz and Vienna, Austria; Passau, Germany; and Bratislava, Slovakia.
• Countries of Eastern Danube—Exploring the eastern realms of the river and the treasures of Vienna, Austria; Esztergorm, Kalocsa, Budapest, and Mohacs, Hungary; Vukovar, Croatia; the Iron Gate; Belgrade and Novi Sad, Serbia; and Bratislava, Slovakia.
• Christmas Markets Along the Danube—Celebrating the holiday season in the quintessential winter wonderland of Austria, Germany and Slovakia. Guests can get in a festive mood in exploring the traditional Christmas marketplaces and town squares famous for their holiday singing and dancing, cuisine, shopping and holiday cheer, from Munich's Christkindlmarkt that dates back to the 14th century to the age-old Viennese Christmas Market at City Hall and Christmas Village at Belvedere Palace.

Crystal Debussy (The Seine River), maiden voyage June 4, 2017—As Paris is a year-round dream destination, 5-, 7- and 10-night voyages will explore the City of Light with multiple overnights. The ship's sleek design and smaller size (84 guest capacity) will allow the opportunity to conveniently access berths near the Eiffel Tower for guests to extend their stay in Paris.


• Best of Paris, Seine River & Normandy—An itinerary that highlights the quaint villages and lush valleys that inspired impressionists like Monet and Van Gogh, including the garden at Giverny and the charms of Auvers-Sur-Oise and traces the historic footsteps in the gardens of Versailles. A double overnight will leave guests within walking distance of charming Honfleur and position travelers closer to the surrounding areas' popular attractions including the beaches of Normandy and Deauville.
• Paris & The Arts—An in-depth immersion into the priceless masterpieces housed in this great city, from the Musee d'Orsay and d'Art Moderne de la Ville de Paris to the famed Louvre; then venturing to Rouen in the heart of Normandy before returning to Paris.
• Pre-Christmas Shopping in Paris—The magic of the season is the focus of this enchanting voyage, replete with indulgent culinary delights and plenty of holiday shopping and fantasy window shopping. Guests can immerse themselves in the Marche de Noel outdoor bazaar and enjoy street performances along the Rue du Gros Horloge in Rouen.

Crystal Bach (The Rhine River), maiden voyage June 18, 2017—The vessel's 14-night itinerary boasts overnight stays in fascinating and enchanting cities including Amsterdam, Netherlands; Basel, Switzerland; and Ruedesheim, Germany as it travels along the Rhine and Moselle Rivers. A special 10-night voyage again explores the quaint Christmas markets that are synonymous with the region.


• Classic Rhine—Visiting the aforementioned overnight ports, as well as Antwerp, Belgium; Nijmegen, Cologne, Cochem, Koblenz, Mainz, Speyer, Kehl, and Breisach, Germany, and this voyage also allows for additional stays in Frankfurt to explore the 2,000-year-old metropolis and get a birds-eye view from atop the Main Tower, one of the city's tallest buildings.
• Christmas Markets along the Rhine—The snow-flecked towns along the Rhine River will bring storybook holidays to life, inviting travelers aboard the 110-guest capacity Crystal Bach to visit two of Switzerland's loveliest markets—Barfusserplatz and Munsterplatz in Basel—plus historical abbeys and cathedrals. An overnight in Cologne sets the stage to feel the magic of the holidays in the festively decorated city which is known to have one of the largest Christmas markets in all of Europe.

Crystal Ravel (The Garonne & Dordogne Rivers, & Gironde Estuary), maiden voyage August 8, 2017—Delving into the heart of France's most renowned wine region beloved by, both, connoisseurs and novice oenophiles, the 84-guest capacity Crystal Ravel explores the UNESCO-designated cultural site of Bordeaux, which boasts more protected buildings than any other French city outside of Paris.


• Grand Europe—The 110-guest capacity Crystal Mahler will transit the Rhine-Main-Danube with its many locks that connect the continent's two mightiest rivers (the Rhine and the Danube), to explore the treasures of each. From the iconic windmills of Holland to the fairytale villages of Germany's countryside, guests will have ample opportunity to immerse themselves in the charm of the destinations, with overnights in Budapest, Vienna, Passau and Amsterdam.