Is St. Kitts Vying For An Oasis? 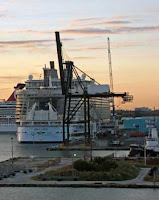 Royal Caribbean has spent nearly a week now wowing pre-inaugural guests aboard Oasis of the Seas and at least one of them is prepared to wow the cruise line right back. As an invited guest of Royal Caribbean Intl and Celebrity Cruises, Senator Ricky Skerritt, St. Kitts' Minister of State for Tourism, spent last Sunday and Monday nights aboard the massive Oasis, docked at Florida's new Port Everglades Cruise Terminal 18, which was designed and built especially as the ship's home port.

While on board, Minister Skerritt toured the impressive ship, attended orientation workshops, and held discussions with his hosts, including Royal Caribbean's Chairman and CEO, Richard Fain and Senior Vice President for Land Operations, Craig Milan. Skerritt described the 5,400 passenger ship as "awesome" and his experience on board as "enlightening." According to him, "The innovative designs and standards being employed onboard in delivering customer service, use of technology, and various energy and environmental management systems are instructive for all who have interests in the future of tourism."

And, oh by the way, Minister Skerritt revealed that St. Kitts' Port Zante can physically accommodate Royal Caribbean's Oasis of the Seas, the largest and newest cruise ship in the world, and it may happen sometime in the future as the island's cruise port has been officially assessed as "Oasis capable."

Royal Caribbean Intl and Celebrity Cruises brought 76,772 passengers to St. Kitts last season and will almost double those numbers to 130,368 this season. Minister Skerritt predicts that Royal Caribbean's numbers will increase by a further thirty percent in 2010/2011. Located in the northern Leeward Islands of the Caribbean, St. Kitts offers a diverse tourism product developed from the destination's natural beauty, cultural heritage and rich history. The island's stunning variety of tourism attractions include hiking through the tropical rainforest, riding the Caribbean's only scenic passenger railway, visiting the Caribelle Batik factory, touring Brimstone Hill Fortress National Park (an UNESCO World Heritage Site), and the more traditional vacation pastimes such as watersports, golf, shopping, tennis, gourmet dining, gaming at one of St. Kitts' two casinos, or simply relaxing on one of the island's sandy beaches.

For information about St. Kitts, visit St. Kitts Tourism or check out what to see and do there on CruiseDiva.com.

I went on a cruise to the Bahamas two years ago and I loved it! I’m looking to go on one in the new year and it definitely has to be in the Southern Caribbean. Celebrity X cruises goes all the way down to Grenada and Tobago…so I’m itching to catch that cruise….an Afrobella cruise sounds really nice to me!!!!

Nice to see you! It is fantastic topic! I wanna say thanks to this writing company, that my friend recommended to me and to writers, that work there, for their quick reply and good patience. My master is always crazy about requirements so he said that he needed everything to be at high level. After using this writing company I have got my first “A” grade and, I think, not the last in this year!